On August 25, Ambassador Cong Peiwu published a signed article titled “My view on the Meng Wanzhou Incident” on The Hill Times. Presented below is the full text, originally posted on the Chinese embassy website. 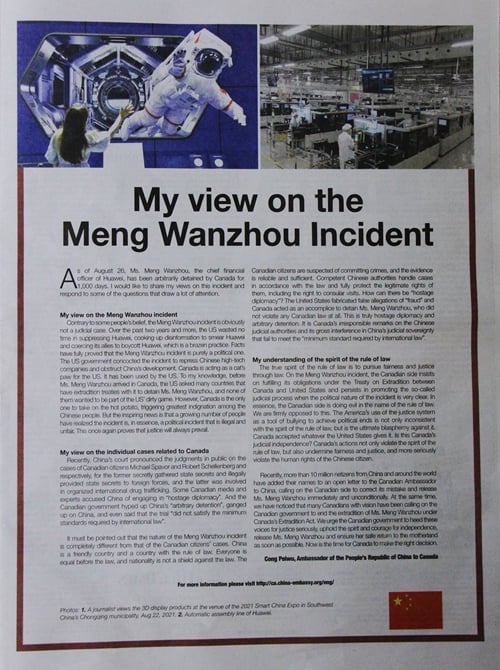 As of August 26, Ms. Meng Wanzhou, the chief financial officer of Huawei, has been arbitrarily detained by Canada for 1,000 days. I would like to share my views on this incident and respond to some of the questions that draw a lot of attention.

My view on the Meng Wanzhou incident

Contrary to some people’s belief, the Meng Wanzhou incident is obviously not a judicial case. Over the past two years and more, the US wasted no time in suppressing Huawei, cooking up disinformation to smear Huawei and coercing its allies to boycott Huawei, which is a brazen practice. Facts have fully proved that the Meng Wanzhou incident is purely a political one. The US government concocted the incident to repress Chinese high-tech companies and obstruct China’s development. Canada is acting as a cat’s paw for the US. It has been used by the US. To my knowledge, before Ms. Meng Wanzhou arrived in Canada, the US asked many countries that have extradition treaties with it to detain Ms. Meng Wanzhou, and none of them wanted to be part of the US’ dirty game. However, Canada is the only one to take on the hot potato, triggering greatest indignation among the Chinese people. But the inspiring news is that a growing number of people have realized the incident is, in essence, a political incident that is illegal and unfair. This once again proves that justice will always prevail.

My view on the individual cases related to Canada

Recently, China’s court pronounced the judgments in public on the cases of Canadian citizens Michael Spavor and Robert Schellenberg and respectively, for the former secretly gathered state secrets and illegally provided state secrets to foreign forces, and the latter was involved in organized international drug trafficking. Some Canadian media and experts accused China of engaging in “hostage diplomacy”. And the Canadian government hyped up China’s “arbitrary detention”, ganged up on China, and even said that the trial “did not satisfy the minimum standards required by international law”.

It must be pointed out that the nature of the Meng Wanzhou incident is completely different from that of the Canadian citizens’ cases. China is a friendly country and a country with the rule of law. Everyone is equal before the law, and nationality is not a shield against the law. The Canadian citizens are suspected of committing crimes, and the evidence is reliable and sufficient. Competent Chinese authorities handle cases in accordance with the law and fully protect the legitimate rights of them, including the right to consular visits. How can there be “hostage diplomacy”? The United States fabricated false allegations of “fraud” and Canada acted as an accomplice to detain Ms. Meng Wanzhou, who did not violate any Canadian law at all. This is truly hostage diplomacy and arbitrary detention. It is Canada’s irresponsible remarks on the Chinese judicial authorities and its gross interference in China’s judicial sovereignty that fail to meet the “minimum standard required by international law”.

My understanding of the spirit of the rule of law

The true spirit of the rule of law is to pursue fairness and justice through law. On the Meng Wanzhou incident, the Canadian side insists on fulfilling its obligations under the Treaty on Extradition between Canada and United States and persists in promoting the so-called judicial process when the political nature of the incident is very clear. In essence, the Canadian side is doing evil in the name of the rule of law. We are firmly opposed to this. The America’s use of the justice system as a tool of bullying to achieve political ends is not only inconsistent with the spirit of the rule of law, but is the ultimate blasphemy against it. Canada accepted whatever the United States gives it. Is this Canada’s judicial independence? Canada’s actions not only violate the spirit of the rule of law, but also undermine fairness and justice, and more seriously violate the human rights of the Chinese citizen.

Recently, more than 10 million netizens from China and around the world have added their names to an open letter to the Canadian Ambassador to China, calling on the Canadian side to correct its mistake and release Ms. Meng Wanzhou immediately and unconditionally. At the same time, we have noticed that many Canadians with vision have been calling on the Canadian government to end the extradition of Ms. Meng Wanzhou under Canada’s Extradition Act. We urge the Canadian government to heed these voices for justice seriously, uphold the spirit and courage for independence, release Ms. Meng Wanzhou and ensure her safe return to the motherland as soon as possible. Now is the time for Canada to make the right decision.