An article about the [failed] attempt to ‘de-platform’ Vanessa Beeley in 6 cities of her 7-city tour.

Vanessa Beeley, the award-winning journalist who has gained notoriety for her on the ground reporting on the Syrian conflict has faced opposition in her efforts to speak to Canadian audiences at the invitation of local anti war activists.

According to Ken Stone of the Hamilton Coalition to Stop the War, a lead organizer of Beeley’s cross-Canada speaking tour, six venues have so far backed away from hosting the UK journalist’s talks. These include Palestine House in Mississauga, the Steelworkers Hall in Toronto, St. Paul’s University in Ottawa, the University of Montreal, the University of Winnipeg, and the Millenium Library, also in Winnipeg.

Stone explains that the withdrawal from agreements at each venue to host Beeley were preceded by the circulation of at least two hit pieces on the journalist upon her arrival in Canada – one by La Presse in Quebec and one by the Huffington Post. Stone explained that the decision to cancel in each case was precipitated by the circulation of these articles by unknown actors.

“There wasn’t an organized effort, but there were people in individual cities where she was speaking who took it upon themselves to circulate these articles behind the scenes – shadowy figures who tried their very best to scare the managers of various venues into cancelling, and they did so six times.”

The proper name of the tour is ‘Canada’s Dirty War on Syria: The White Helmets and the Regime Change War billionaires.’ Ms. Beeley was intent on presenting her research into Canada’s role in undermining the government of President Bachar Al Assad. Beeley’s message directly contradicts mainstream reporting on the conflict, particularly her research into the White Helmets, which she and other independent journalists classify as a propaganda construct providing public relations cover for regime change efforts and continued economic sanctions that are decimating the country.

The justification for one venue after another cancelling is not clear, as none have officially provided any explanation. According to Stone, however, there were two venues on the tour that allowed the Beeley presentation to take place in spite of this unexpected opposition. One was the New Vision Church in Hamilton. The other was the Knox Metropolitan United Church in Regina. Both Ministers highlighted concerns from a complainant about ‘hate speech’ being directed toward the White Helmets, and the prospect of traumatizing vulnerable Syrian refugees.

Organizers explained to the Ministers that the talks were not about hate speech but rather about highlighting the findings of an independent journalist and war correspondent ‘whose research methods are very thorough’ about the true nature of the Syrian conflict and the role of the White Helmets.

According to an email, forwarded to this author, from the pastor at the Hamilton venue, there was concern expressed about Beeley engaging in ‘hate speech’ toward the White Helmets. According to the pastor at the Regina venue, the letter he received essentially echoed the common, mainstream media reinforced perception that the White Helmets are heroes, that Syrian civilians are fleeing a despotic Syrian regime, and that Beeley is spreading “lies for war criminal Bashar Assad.”

Stone added, “one of the people who spoke to both Ministers about the ‘traumatization’ turned out to be traced back to an address in the state of Washington USA. She was claiming that she was going to be traumatized by Vanessa speaking 4000 miles away!”

Full disclosure: this author was active in trying to secure a venue for Vanessa Beeley at the University of Winnipeg. The deplatforming in this case was a little more complicated. I had apparently used an improper process to secure the space on campus initially. However, when the event coordinator on campus got hold of me and explained the problems with the process, she directed me to find a venue elsewhere. When I asked about the prospects for booking the space by following the proper procedure, and paying the appropriate fees, I was told the event would likely not go ahead owing to problems the President’s Office had with the content.

In spite of multiple attempts to get more details over several days, the university has yet to provide an explanation of precisely what they found objectionable about the ‘content.’

A second venue, the Millennium Library in downtown Winnipeg was secured through friendly staff six days in advance of the event date. However, on Tuesday (Human Rights Day as it turns out) two days before the event was to take place, I received a call from a higher up – the Manager of Library Services. He had expressed regret but that after lengthy deliberations he had with other team members, he determined that the event would violate their guidelines and that he was exercising his right under the contractual agreement to cancel the booking.

The War on Syria: Vanessa Beeley’s Lecture Tour in Canada

No official explanation was offered beyond this although when pressed, this individual did indicate an ‘opinion’ on his part that after reviewing the speaker’s content, the content of the presentation could be construed as hate speech. Overtures to have this manager meet with myself and other organizers to assuage concerns about the event, were rejected. He said his decision was final. He did relent to sending a written explanation of his reasons for cancelling the booking:

“We considered our room usage Regulations and Conditions of use, event content, and community interests in this decision.”

Further correspondence was forwarded to me through a third party about the event planned for the University of Winnipeg from another member of the campus community. The concerns could be summarized as follows:

About a day later, a representative of the university’s student executive had private messaged the organizers through the Winnipeg facebook event page expressing concern about the event. This person echoed the points above. The individual’s facebook page, however, reveals a clear effort to deplatform Vanessa Beeley. 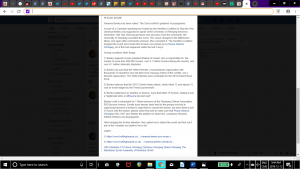 “Vanessa Beeley has been called “The Syria conflict’s goddess of propaganda.”

As part of a Canadian speaking tour hosted by the Hamilton Coalition to Stop the War, Vanessa Beeley was supposed to speak at the University of Winnipeg tomorrow, December 12th. But, following pressure and advocacy from the community, the University of Winnipeg cancelled the event. The venue changed to the Millennium library and again after community pressure, they cancelled it. The Hamilton Coalition dropped the event and it looks like its been now picked up by Peace Alliance Winnipeg. All of this has happened within the last 3 days.

Among countless other things;

1) Beeley supports Syrian president Bashar Al-Assad, who is responsible for: the murder of more than 400,000 Syrians, over 5.7 million Syrians fleeing the country, and over 6.1 million internally displaced.

2) Beeley has said that the White Helmets, a humanitarian organization with thousands of volunteers who risk their lives rescuing victims of the conflict, are a terrorist organization. The White Helmets were nominated for the 2016 Nobel Peace Prize.

3) Beeley believes that the 2015 Charlie Hebdo attack, which killed 12 and injured 11, was an event staged by the French government.

4) Beeley legitimized an airstrike on Douma, Syria that killed 70 Syrians, stating it was a “legitimate strike on #Douma terrorist nest”.

Beeley’s talk is scheduled for 7:00pm tomorrow at the Winnipeg Chilean Association, 892 Burrows Avenue. Emails have already been sent to the groups involved in organizing tomorrow’s lecture to urge them to cancel the lecture, but since there’s just 24 hours until the lecture, please share this post to make sure that Peace Alliance Winnipeg WILL NOT give Beeley the platform to share lies, conspiracy theories, hateful rhetorics and propaganda.

Vanessa Beeley is apparently by no means unique or distinct in experiencing this kind of character assassination. A September 2019 article for Mint Press News, authored by Alexander Rubinstein, detailed how three prominent journalists: Rania Khalek, Anya Parampil and Max Blumenthal, were seeing their work suppressed at the hands of so-called journalists with suspicious links to think tanks and media institutions. To quote the Mint Press article (emphasis added):

The tactics employed to silence these reporters have included death and rape threats, spurious lawsuits, threatening phone calls, pressure campaigns to have them fired, and persistent harassment against any institutions publishing their work or hosting their talks, books, or documentary tours.

This article, and Vanessa Beeley’s own reporting reveals that there is a sophisticated network of entities aligned with think tanks and media institutions who have been actively involved in this campaign to contain the Syria narrative. Individuals like Chris York of the Huffington Post UK, the link to whose article is being shared by Winnipeg based agitators, has been a leading critic of Beeley’s since January of 2017.

According to Beeley, York’s series of articles discrediting her work typically relied on familiar tropes about being ‘Russia-centric’ and ‘Assadist’. These were quickly followed by Olivia Solon’s hit piece for the Guardian, and articles in a similar vein by The UK’s Times newspaper, former Guardian correspondent, Brian Whitaker, Bellingcat, the BBC, journalist Nafeez Ahmed, academic Idrees Ahmad, and a 48-page report from the White Helmet PR agency, Syria Campaign.

While the campaign to discredit Beeley and others trying to expose the reality behind the Syrian conflict seems daunting, Ken Stone of the Hamilton Coalition to Stop the War sees a silver lining behind the dark cloud of suppression of dissent. He believes that the forces of empire are effectively on the ropes.

“They are unable to manufacture consent for their foreign policy and their regime change wars and so the only resort they have left is to try and silence the opposition…Even the idea of local citizens in a community being able to rent a hall and bring in a speaker by invitation and open it to the public. What does that say about our Charter Rights of freedom of expression and freedom of assembly? Nonetheless, despite all that, we had, so far six successful meetings for Vanessa.”

Barring the prospect of a last minute deplatforming, Vanessa Beeley’s final presentation is scheduled to take place in Winnipeg, Manitoba at the Winnipeg Chilean Association at 892 Burrows Ave. Admission is free. More details at the event’s facebook page; https://www.facebook.com/events/510908552828529/