On behalf of Hamilton’s Community Coalition Against Racism, Ken Stone gave the following statement at the International Day for the Elimination of Racial Discrimination (Hamilton): 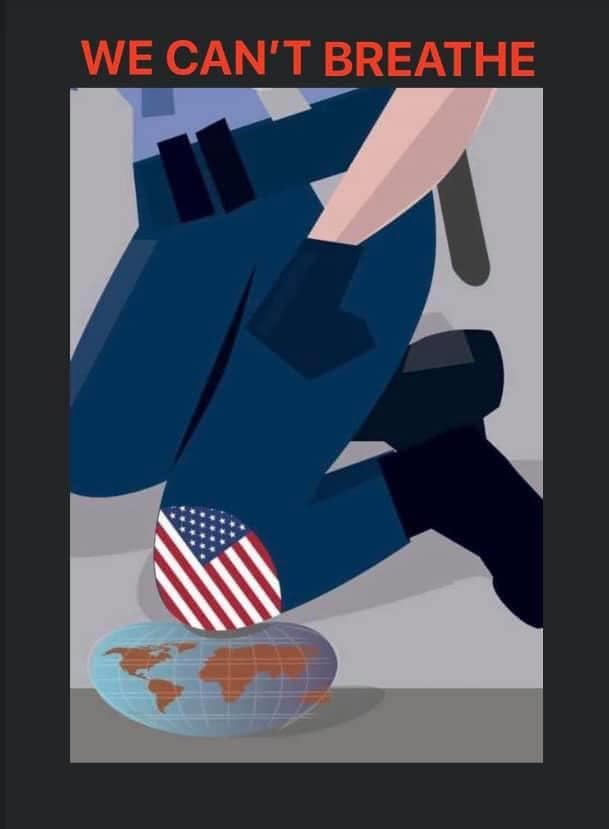 CCAR Statement on Police Brutality vs. Indigenous and Racialized People

The Hamilton Community Coalition Against Racism (CCAR) condemns the all-too common police killings of indigenous, black, and people of colour in Canada and the USA. Six indigenous Canadians died at the hands of police since March of this year. Canadians were also horrified to watch the video of the national police beat Chief Alan Adam (Athabaskan Chipewyan First Nation) after a minor traffic stop. They were equally disgusted by Commissioner Lucki’s initial claim that there was no systemic racism in the RCMP. Police killings of racialized people proceed at the rate of three per day in the USA. In Canada, the list of racialized victims of police violence is too long to publish here. Southeast Asian refugee, Po La Hay, and Black-Canadian Rikki Jeremiah, both of Hamilton, are just two examples.

The knee that snuffed out George Floyd’s life is the same knee, figuratively, that snuffed out the life of 23-year-old Black-Canadian Rob Gentles of Hamilton who died from asphyxiation during a lockdown in 1993 in Kingston Penitentiary. And it’s the same knee that rests on the necks of people of colour in Venezuela, Syria, Iran, Nicaragua, Haiti, Zimbabwe, and many other countries which are targets of Canada’s foreign policy, because Canada’s racist domestic policy is closely mirrored in our racist foreign policy.

CCAR gained much anti-racist expertise while advocating for victims of racist policing over the past 31 years. Based on our experience, below are the changes we recommend to policing in Hamilton:

1) The mayor, city councillors, and police have to exercise leadership and declare they won’t tolerate racist policing in Hamilton and will BAN POTENTIALLY LETHAL RESTRAINTS, such as chokeholds, which cause death by asphyxiation as in the cases of Rob Gentles and George Floyd, both black men.

2) END THE MILITARIZATION OF POLICE, a phenomenon imported from the USA and expanded by former Prime Minister Stephen Harper, who turned over at least a billion dollars’ worth of military hardware from the Toronto G-20 summit to police forces across Canada. In Hamilton, this means selling the armoured car ($250,000) and the assault rifles against which CCAR protested. On June 9th, Halifax City Council cancelled its purchase of an armoured vehicle and voted to shift the saved money into anti-racism initiatives! Demilitarizing means disbanding the SWAT Team, Mounted Unit, and riot shields– designed to intimidate the public and make the police feel overly-empowered and invincible.

3) REALLOCATE POLICE BUDGETS: CCAR has been raising concern for decades that spending 20¢ out of every tax dollar on policing, while crime rates are declining, is excessive. The City of Hamilton cannot adequately fund social services, infrastructure, environmental protection, among other items, while carrying a bloated police budget. We support Councillors Nann and Wilson on cutting the police budget and directing part of the freed-up funding to community safety and well-being.

4) REMOVE POLICE FROM SCHOOLS because students do NOT need in-school policing. They need educational assistants, nurses, social workers, breakfast programs, and help with their homework.

5) BODY CAMS is an item whose time has come. While they are costly, they have widely proven their effectiveness in documenting police brutality. Other nearby Canadian municipalities are equipping their cops with body cams. Hamilton should too.

6) ISRAELI TRAINING OF POLICE should be strictly avoided. Hamilton dodged a bullet on this in 2005 when CCAR filed a formal complaint about the visit by 32 Canadian police chiefs to Israel for training purposes. Following the boisterous public meeting over CCAR’s formal complaint, the idea was shelved in Hamilton but came to be the norm in the USA. The result was the routine use of lethal force against people of colour in the USA, following from the racist policing methods in apartheid Israel which routinely targets Palestinians with lethal force.

7) CCAR has been arguing for RACE-BASED STATISTICS in policing for three decades. The Hamilton Police Services denied for years that they maintained such statistics and argued that such statistics were a bad idea, claiming that they would reinforce stereotypes that people of colour and indigenous origin were the worst criminal offenders. However, in the midst of the debate over carding (street checks) in 2015, the HPS revealed that, in fact, it had been collecting race-based statistics all along. These statistics were useful in showing that police disproportionately stopped people of colour and indigenous origin during their many thousands of street checks per year. Race-based statistics might also indicate that racialized and indigenous communities are indeed over-policed.

Fortunately, the campaign to ban carding, through demonstrations, pickets, press conferences, briefs, letters to the editor, petitions and the like, was partially successful in that new Ontario regulations significantly reduced the number of street checks in Ontario.

8) ANTI-RACIST HIRING AND PROMOTION POLICY: While, due to public pressure, there has been some improvements here, limiting nepotism, raising academic standards, and finally promoting some racialized police to the HPS command structure, there has been resistance from police at every step of the process. More needs to be done to prevent bullies and closet racists from being hired.

9) ANTI-OPPRESSION TRAINING: Taking into account the systemic racism that informs Canadian history, police should be encouraged to engage in anti-oppression policing, that is to say, policing that recognizes the wrongs done to indigenous, racialized, and LGBTQ+ people in the past and seeks to remedy those wrongs. De-escalation techniques should be a major focus of policing, moving forward.

10) POLICE SERVICE BOARD: It’s past due that the Police Service Board be made truly to represent the many communities it’s supposed to serve. Diversity and lived experience is an important asset.

11) PUBLIC EDUCATION: Just pennies are spent on educating the public about their rights when stopped by police, when filming police, when filing complaints about police. This has to change.
No single measure or group of measures will ever really “fix” the problems of policing in Canada. Rather, racist policing will be with us as long as systemic racism exists. The system of racism resides in the very structures of the Canadian state: the colonial police force (RCMP), the Indian Act, the reservation system, 100 years of a whites-only immigration policy, the British Commonwealth, the monarchy, the capitalist system… Only a radical revisioning and restructuring of Canadian society can really eliminate the culture of systemic racism and create a transformative model of public safety.
Nonetheless, it is worth fighting for change now, and, to win, CCAR has always maintained that the unity of working people and their allies of all colours and all religious persuasions is required.
Photo: Chief Alan Adam of the Athabaskan Chipewyan First Nation was beaten up by a RCMP officer after a minor traffic stop on March 10, 2020, in Fort McMurray, Alberta.