The Hamilton Coalition to Stop The War is pleased to endorse this event. 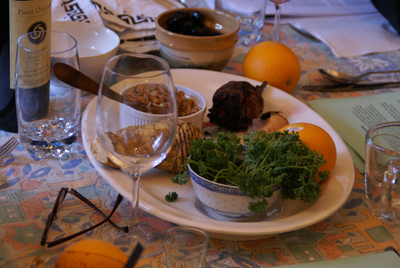 If you have never attended a Passover seder, this is your chance to do so. If you support the Palestinian cause, this is a very pleasant culinary opportunity to demonstrate your support.

At Passover, Jewish families traditionally celebrate with a ritual family dinner at which the story of the liberation of the ancient Hebrews from oppression in the land of Egypt is recited. Seder means “order”—the order of the meal and ritual of Pesach that Jews all over the world have participated in for centuries. It is customary among Jews to invite guests, both Jewish and non-Jewish, to join their Passover celebration.

Our seder in Hamilton is dedicated to a free Palestine and the liberation of all peoples. And YOU are invited!

New Vision United Church is located across from Hamilton City Hall and is wheelchair accessible. There’s plenty of paid parking behind City Hall. The church is also adjacent to the HSR’s MacNab Street Transit Terminal.

We are also pleased to announce that we will have childcare available. If you would like to take advantage of the childcare service, please email us in advance at: seder@jelithin.ca.

GUEST SPEAKER: We are pleased to announce that the guest speaker at this year’s Seder in Hamilton will be Robert Masoud, proprietor for many years at the Beit Zatoun meeting hall in Toronto, and long-time promoter of Palestinian olive oil in Canada. Robert will be speaking on the “Nakba”, the catastrophe caused for the Palestinian people by the creation of the State of Israel. He will also promote “Land Day”, the day on which Palestinians demand the right of return to their former homes and farms in Palestine

Rabbi David Mivasair is motivated by the commandments “justice, justice you shall pursue” and “seek peace and pursue it”.  For over 25 years, David served as the spiritual leader of synagogues in the US and in Vancouver, where he lives.  David is active in the leadership of Independent Jewish Voices in Canada and Jewish Voice for Peace in the US.  He lived in Israel for four years and in May of 2017 went with 130 other Jews militantly to support Palestinian activists defending their communities from destruction by the State of Israel in the illegally-occupied West Bank.

Rabbi Mivisair will preside over the Hamilton seder.

If you have any questions, please email: info@jelithin.ca.