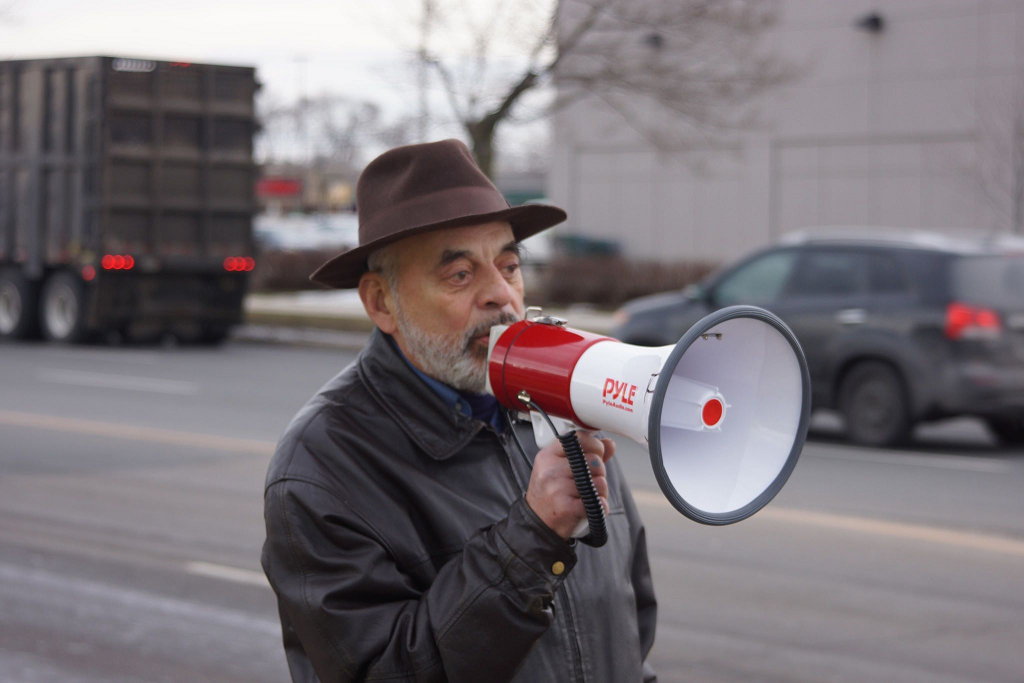 My name is Ken Stone and I am the treasurer of the Hamilton Coalition To Stop The War. I wish to thank the organizers for the privilege of speaking to you on the occasion of May Day.

On May Day, it is traditional for working people to rant and rail against war and militarism. We rant and rail against war and militarism for two important reasons. First, it is we working people who suffer the most from wars. It is our sons and daughters who come home in body bags. It is our family members who become widows, widowers, and orphans. It is our homes, or the homes of our brothers and sisters in distant lands, which are burned to the ground. It is we who bear the scars, physical and emotional of the permanent war of terror raging around the globe. Secondly, all the public funds lavished on wars and militarism are funds that are denied to the social programs on which we depend.

This speech is about guns and butter. Bismarck, the Prussian aristocrat credited with unifying Germany in the 19th century, was attributed with remarking that, in a country which spends a lot on war and armaments, the people will suffer. And that’s how it’s turning out in Canada today.

Let me give you some examples.

On February 4 of this year, Canada’s Minister of Global Affairs, Chrystia Freeland, shamefully hosted a meeting of the Lima Group, an unofficial group of countries dedicated to regime change in Venezuela. On that very same day, she announced she was giving 53 million dollars of your tax money, brothers and sisters, to a guy in Caracas named Juan Gauidó in order to help overthrow the legitimate government of President Nicolas Maduro.

Now, brothers and sisters, what could we do with 53 million dollars? I’ll tell you what we could do with 53 million dollars. For 15 months, we could make payments to 4000 recipients of the Basic Income Pilot Project, which was recently cancelled by Premier Doug Ford of Ontario, because he said it was not an efficient use of public funds. There are people in this rally who are the victims of the cancellation of that pilot project. I personally know some of the people culled from that project. These people can no longer afford butter. They are in danger of going hungry or homeless!

Another example: the Trudeau government of Canada is current engaged in a so-called “peace-keeping mission” in Mali, a country in West Africa. But this mission has nothing to do with peace at all. It is a neo-colonial operation to protect the interests of Canadian gold-mining companies in Mali, companies which extracted $1.2 billion dollars of pure gold from Mali in 2016 and left that country in tatters. Canada’s one-year “peace-keeping” mission on behalf of Barrick Gold and other Canadian miners cost 400 million dollars of your tax money, brothers and sisters. What could we do instead with 400 million dollars? I’ll tell you, brothers and sisters. For 392 million dollars, we could pay for the processing and resettling of each and every refugee and asylum-seeker in Canada for one year, many of whom had to flee their homes in distant lands where Canada and its NATO allies have made wars which turned whole populations into refugees.

The Hamilton Spectator recently published an article detailing the never-ending cost to the Canadian taxpayer of the war in Afghanistan. Why? Because more and more of the 40,000 Canadian veterans of that illegal NATO operation are requiring treatment for PTSD for the things they did, the terrible things they did – just following orders – to the Afghani people, such as regular midnight raids on the homes of Afghani famers and workers, seizing “suspects”, and then turning the ”suspects” over for torture to Afghan authorities. How would we like it if foreign soldiers burst into our homes at midnight and seized our fathers, our husbands, our sons? The scandal about the torture of prisoners went right up to former Prime Minister Stephen Harper who went so far as to prorogue parliament to avoid an enquiry.

I am NOT saying that the vets don’t deserve to receive treatment for their PTSD. They were just pawns in a grand international game of chess. I AM saying that making war on Afghanistan was a criminal act which we Canadians should not have to pay for. So far, we have paid, according to some estimates, between 18 and 25 billion dollars and that figure will rise continuously over the next forty years. What could we buy instead for 25 billion dollars? I’ll tell you, brothers and sisters. For 20 billion dollars, we could build a high-speed rail line running between Windsor and Toronto. And for the longer-term cost of the war in Afghanistan, we could probably extend it all the way to Quebec City.

Which do you prefer? High-speed, environmentally-friendly public transit or war? Guns or butter?

Which do you prefer, brothers and sisters, guns or butter? The chaos of war or environmental justice?

On May Day, we working people need to let the power brokers in this country know that we will no longer stand for their wars and militarism. We have to develop an independent foreign policy for Canada. We have to get out of NATO. We have to see to it that our tax dollars go to healthcare, childcare, pharmacare, education, infrastructure, environmental protection, anything but warfare.

Thank you for your kind attention.