Two important unions in Australia have taken strong stands against the aggressive pact to provide Australia with nuclear-powered submarines. The deal is referred to as AUKUS because it is between Australia, the UK, and the US – three of the so-called “Five Eyes” 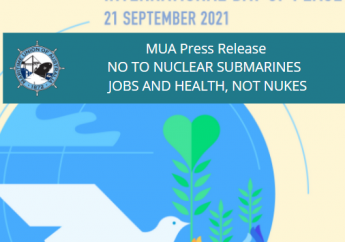 The Maritime Union of Australia (MUA) released a statement on September 21, the International Day of Peace: “No to Nuclear Submarines – Jobs and Health, not Nukes”. The MUA noted pointedly that “at a time when Morrison [Australian Prime Minister] should have been pursuing vaccination supplies and providing maximum support to our health system and millions of people in lockdown, he has been pursuing secret military deals. The deal will continue to escalate unnecessary conflict with China.”

The MUA called for the billions wasted on submarines to instead be directed to building renewable energy, pay increases for health workers and investments in the health system, investing in education and firefighting, and support for job seekers. The MUA statement concludes with a strong statement of international solidarity:

“Workers have no interest in war with China or any other country. Every effort should be made to pursue peaceful relations. The MUA stands in solidarity with workers in all countries in opposing war and wasteful environmentally harmful military spending.”

The Maritime Union of Australia represents some 16,000 waterside and port workers, seafarers and divers. In 2019 the MUA called a work stoppage for workers to attend September 20th Global Climate Strike rallies.

The Electrical Trades Union, representing over 60,000 Australian electrical workers, also condemned the AUKUS deal as a “dangerous delusion”. In addition, the ETU forcefully pointed out the ways that the deal undermined Australian control of engineering and manufacturing capacity:

“This decision represents a betrayal of responsibility to Australia’s non-nuclear policy and a betrayal of two generations of highly-skilled, secure, well-paying Australian shipbuilding jobs.”

“It is dangerous and delusional to rely on nuclear submarines for our defence. We are fearful this will also cost Australia much needed engineering, manufacturing, and construction jobs.”

The MUA and the ETU should be applauded, and emulated, for opposing the efforts of their own government to enmesh Australia in the war-mongering foreign policy of the United States. Workers have no interest in being used as cannon fodder in wars of aggression or regime change. Allying with our governments in imperial adventures is a threat to peace, but it also weakens our fight against the corporations and governments that we face here in Canada. The example of international solidarity set by the MUA and ETU is a better road for the labour movement than tailing our government’s slavish obedience of US commands and chasing Senate appointments.

Who Are the Five Eyes?

Who are the Five Eyes? Former NSA contractor Edward Snowden described the clandestine intelligence alliance of the US, the UK, Canada, Australia and New Zealand as a “supra-national intelligence organisation that does not answer to the known laws of its own countries” Documents leaked by Snowden in 2013 revealed that the Five Eyes have been spying on one another’s citizens and sharing the collected information with each other in order to circumvent restrictive domestic regulations on surveillance of citizens. In the case of AUKUS, even Canada and New Zealand were excluded from the machinations by the senior partners of the very Anglo-imperialist alliance.

Canadian unions should follow the example of our Australian counterparts and fight for a policy of international peace and co-operation, and oppose Canadian support for American saber-rattling.